These are the projects I’m now actively involved in and working with:

Maarten Hogenhuis is, without doubt, one of the most valuable and inspiring talents in the whole Dutch jazz scene of today. I met him in a group lesson at the Conservatorium van Amsterdam during the 2012-13 academic year, but it was not until a few months later when we got to play together for the first time. It was in a jam session at the Badcuyp, where our common friend Ellen Tackenkamp introduced us. After that, Maarten decided to form a trio in order to apply to the Keep An Eye International Jazz Award that took place in April 2013 in Amsterdam. He asked me to join him together with the great and solid-as-a-rock bass player Thomas Rolff and, since the moment we met to play and record the songs for the competition, music and friendship came easy and from then on it’s always been so much fun and joy to play together. We won the 1st prize of that competition and Maarten won the best soloist prize as well. In June 2014 Maarten released his first album as a leader, a double disc that includes both the works with his quartet and his trio. We love to play jazz standards but also original compositions by Maarten and other Dutch jazz musicians.

I don’t have an own project, but we all have invested so much time and energy into this one that each of us feels this is his own project. I know Néstor since we were kids, as both of us are from Reus and went to the same school, same high school and same conservatory. In 2007, Néstor and I met Adrià and Vic at the ESMuC, our common school of music in Barcelona, and with them we started a very nice, healthy and easy going friendship that rapidly converted into a musical project. That means our band is an aboslut reflection and result of our friendship, the blend of our personalities, and for me this is the main key and value that distinguishes our project. It’s something easy to appreciate when we are on stage because there is always a special complicity between us that allows us to feel free and perform our music the way we want, with total freedom to jump into the water at any point. In 2013 we thought it would be nice to give new winds to our music and that’s how we began two networking projects STN! CANTA and STN! BATALLA that let us share stage to play our music with great and diverse musicians such as Jorge Rossy, Lluís Vidal, Masa Kamaguchi, Jordi Matas, Ferran Savall, Carles Dénia, Núria Graham, Joan Colomo and Ernest Crusats, among others. In 2013 we incorporated a new member, Miquel, that joined us to take part as a video maker and since then we’ve got a lot of audiovisual material that you can check out in our youtube page and share it around if you like it.

I met Xavi when he was around 16 years old and came by to join the jam sessions that my brother runs at the beautiful Keyboard Jazz Lounge in Reus. At that time he was starting playing and discovering jazz, while keeping learning classical piano. A few years later we found ourselves studying jazz together at the ESMuC in Barcelona, where we also met Vic. Xavi formed this trio in order to play the music he was composing, as well as arrangements of jazz standards, and his bachelor end exam was the culmination to consolidate the trio and look forward to new adventures with it. In march 2014 the trio was enlarged to a quintet with alto and tenor saxophones for two special performances, one with Perico Sambeat and Llibert Fortuny in Tarragona, and the other one with Marcel·lí Bayer and Gabi Amargant in Barcelona. Xavi also arranged some of the music for piano trio and a woodwind quintet, recordings that you can listen in the youtube link below. Recently we recorded an album for a new discography that supports young talents, Seed Music Records, and it’s just been released under the name of Skyline. We are very much looking forward to share the music of this new album around.

This is also a very joyful band to play in because we are very close friends in Amsterdam. Although we formed Trempera! this year 2014, we’ve been already playing a lot together in the previous years, so in a way we could say that it has its origins back in 2009, when Bruno, Lluc, Xavi and I met at the ESMuC, the school of music where we studied our bachelor degree in Barcelona. Since then we took part in many different musical projects of other common friends, so it was a matter of time to create this band. The destiny wanted this to happen in Amsterdam, where we all are currently living in, and where we met Giuseppe, a young talented bass player from Roma, that completes this quintet. We mainly play original compositions by Lluc and Xavi and we are very grateful and happy that Trempera! was a finalist band in the Dutch Jazz Competition 2014 and it was awarded with four prizes in the last edition of the Keep An Eye International Jazz Award 2014 celebrated in Amsterdam. They were great experiences and we hope these recognitions will make us keep working hard and open doors to share our music around, as we already did in the Netherlands, Catalonia and Italy.

In 2012 Pablo introduced us to the amazing world of flamenco music as soon as he got to Amsterdam. That was new for us, not meaning we didn’t know flamenco, but we really never got into it before, except for Jeff, who probably felt the same but with jazz music. Pablo comes from Murcia (Spain) with a deep roots and experience in the tradition of flamenco and jazz and that’s why he wanted to make a project in which he could blend both styles. In 2013 we won the second prize at the Keep An Eye Jazz Award semi finals and that gave us the opportunity to share our project around and keep improving. We play arrangements of jazz standards and original compositions by Pablo and Lluc that we just recorded in the studio at the end of last November, material that is soon to be released. 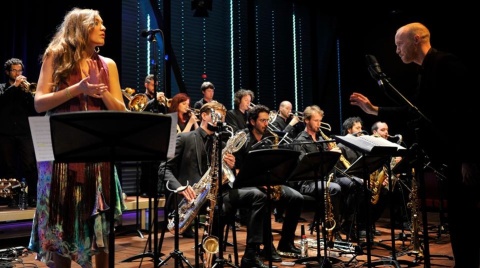 A few years ago, the great Spanish alto saxophone player Perico Sambeat released a flamenco-jazz album with his big band. Bernard was inspired by this project and he wrote a thesis about the analysis and concepts that Perico uses in his music. As a result of this research and spending time on writing new music, Bernard gave birth to the BvR Flamenco Big Band in 2014 in Amsterdam, a twenty-one musicians ensemble that features the traditional line up of a jazz big band plus special flamenco guest artists. As a culmination, we won the first prize in the MeerJazz Big Band Competition with an amazing feedback from the jury, including pianist Kenny Werner, and we’ve just released our first album, Jaleo holandés. 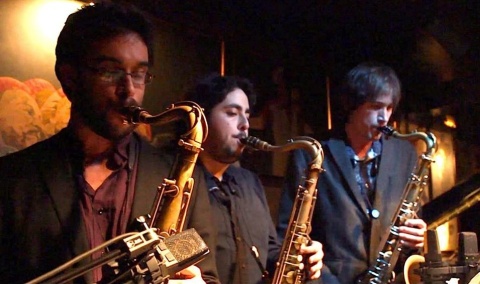 Since 2007 I’ve spent a lot of time sharing projects and great experiences with Lluc, Cèsar and Gianni, my favorite three tenor players and lovely friends, and that’s how I came up with the idea of putting them together in this new project that began in late 2013. The nice thing about this band is that all of us are worldwide spread musicians (New York, Åarhus, Barcelona, Amstedam) and so we decided to establish an annual meeting during Christmas time, when we all go back to our homes in Catalonia and therefore it’s easier to meet and play. In December 2013 we had our debut and it was really exciting to play in four packed venues and receive beautiful comments from the audiences. You can check out three videos we recorded in our last gig at the Keyboard Jazz Lounge in Reus. Last edition, in December 2014/January 2015, we paid homage to the music of The Beatles, a band that I particularly couldn’t love more because it has been part of me since I have memory.

I’d also like to mention these other projects I’m also part of nowadays:

Finally, my recognition to all these bands that I had the pleasure to take part in along my life and helped my development as a person and musician (from the oldest to the newest):